Rogers Family Statement on the Passing of T. Gary Rogers

In 2016, T. Gary Rogers, husband, son, father, brother, grandfather, passed away. Gary was the chairman and CEO of Dreyer’s Grand Ice Cream for 30 years as well as the chairman of Safeway Inc., the Federal Reserve Bank of San Francisco, and Levi Strauss & Co.

Gary lived in Oakland, California, for more than 45 years where he provided leadership and vision to the city and numerous community organizations. His passionate devotion to the University of California, Berkeley, and its rowing team, and the Lighthouse Community Charter School will remain part of his legacy to the Bay Area. His philanthropic generosity, through the Rogers Family Foundation, will continue to focus on his life-long pursuit of creating and sustaining excellence.

Gary loved and took great joy in his family. He and his wife, Kathleen “Cab” Rogers, were married for 52 years and watched their four sons Andy, Matt, Brian and John, marry and have children of their own. His eleven grandchildren will dearly miss their Bwana, the name they called him which means “headman” in Swahili.

Hear Gary’s journey and perspective on life in his own words during his last interview for Alan Olsen’s American Dreams. 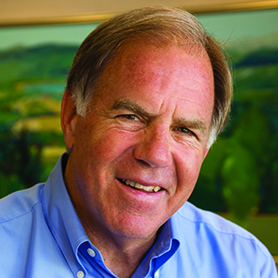 “The joy in life is in the journey.”

Gary Rogers passed away doing what he loved, playing tennis at his home in Oakland, California, on May 2, 2017.

Gary was the chairman and CEO of Oakland-based Dreyer’s Grand Ice Cream, Inc., for 30 years. He also served as a former chairman of Safeway Inc., the Federal Reserve Bank of San Francisco, and Levi Strauss & Co.

Gary was born in Stockton, California, in 1942 and spent his youth in Marin County. A distinguished Eagle Scout, he attributed much of his personal character to his experiences as a Boy Scout, as an oarsman on the crew at UC Berkeley, and his family’s deeply held values of integrity and honor.

In 1963, he graduated with a degree in Mechanical Engineering from the University of California at Berkeley. He was named UC Berkeley All University Athlete that same year and rowed in the 1964 U.S. Olympic Trials.

In the summer of 1964, Gary married Kathleen “Cab” Tuck, whom he met while working on staff at the UC Berkeley Alumni Association Tahoe Alumni Center.

Gary spent the mid-sixties serving a two-year term in the Army as a Lieutenant in the Air Defense Artillery based on Mount Tamalpais.

In 1968, he earned his MBA from Harvard Business School and was honored as a George F. Baker Scholar.

At 34, Gary and his business partner William F. “Rick” Cronk purchased Dreyer’s Grand Ice Cream a small regional ice cream company based in Oakland, California. For the next 30 years, Gary served as Chairman and CEO of Dreyer’s, and together with Rick, built Dreyer’s into the best-selling ice cream company in the United States.

Gary often said the building of the Dreyer’s corporate culture was “the best thing we ever did at the company.” It was a culture based on empowerment; respecting and trusting in the abilities of each individual. Every person felt a personal responsibility to “make a difference.” It made Dreyer’s a coveted place to work. In 2002, Dreyer’s was sold to Nestle.

Gary also served as Chairman of Levi Strauss & Co., the Federal Reserve Bank of San Francisco, and Safeway Inc. He was also a director of Shorenstein Properties, Stanislaus Food Products and the University of California San Francisco Medical Center. He founded and chaired the Oakland Dialogue, a group of East Bay political, educational, and business leaders.

Gary was the primary benefactor of the University of California Cal Crew Forever Endowment Fund, the T. Gary Rogers Rowing Center, and the California Rowing Club for elite post-graduate oarsmen. He was also a member of the High Performance Olympic Committee of U.S. Rowing.

He held numerous public service leadership positions and was the benefactor of the Rogers Family Foundation, which supports the University of California, education and activities for youth in Oakland and the East Bay, Bay Area hospitals, and bioscience research and innovation organizations.

Gary lived “The Spirit of Adventure.” His passion for travel took him all over the world—to both the North and South Poles, the plains of the Serengeti, and the Amazon jungle. He sought out challenges and fought fiercely to overcome them, living by the motto, “There is no such thing as can’t; there is only won’t.”

Gary loved and took great joy in his family. He and his wife, Kathleen “Cab” Rogers were married for 52 years and they watched their four sons Andy, Matt, Brian and John, marry and have children of their own. His eleven grandchildren will dearly miss their Bwana, the name they called him which means “headman” in Swahili.

Gary is also survived by his mother, Virginia, and brothers, Don and Jim. “The joy in life is in the journey.” –T. Gary Rogers