First-ever comparison of Oakland’s district and charter public schools shows need for learning on both sides.

The Oakland Achieves Partnership has released its 4th Annual Progress Report. For the first time, this report offers data (from 2014-15) on whether students are on track for success in all the city’s public schools; district-run and charter. This report, which reveals many areas of strength and challenge for both sectors, was created in hopes of increasing community awareness and transparency, inspiring action, and encouraging data-driven decision making on behalf of students. The report does not lend itself to conclusions and answers, but rather should open up conversations.

“We have the opportunity, as a city and community, to look at the data and ask questions about how we can serve all our students across the city better,” said Ash Solar, Executive Director of GO Public Schools Oakland, one of nine nonprofit organizations that produced the report. “For charter and district public schools, it’s time to move past an era of mutual suspicion and into mutual learning. Each has something to offer the other.”

For example, the report revealed: 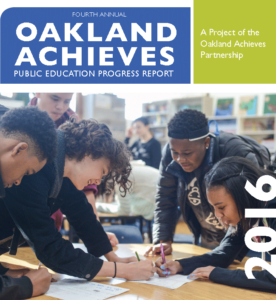 “It is absolutely essential that the Oakland community is able to understand what is working and what it not working for our kids. We have to focus our collective energies on improving all of Oakland’s public schools. This report invites us to focus on the areas that matter the most in ensuring more Oakland students can learn, grow, and thrive,” said Brian Stanley, Executive Director of the Oakland Public Education Fund.

Among the notable findings in the report, overall district-run and charter schools served relatively the same percentage of some key vulnerable populations: