In front of a nondescript old bingo hall in Oakland’s Fruitvale neighborhood stand about a dozen people lined up on a Saturday morning in May. There’s a palpable sense of good fortune in the air. But these people don’t just have to hope that their lucky number comes up. Inside is a guaranteed jackpot: a Tech Exchange Tech Fair. 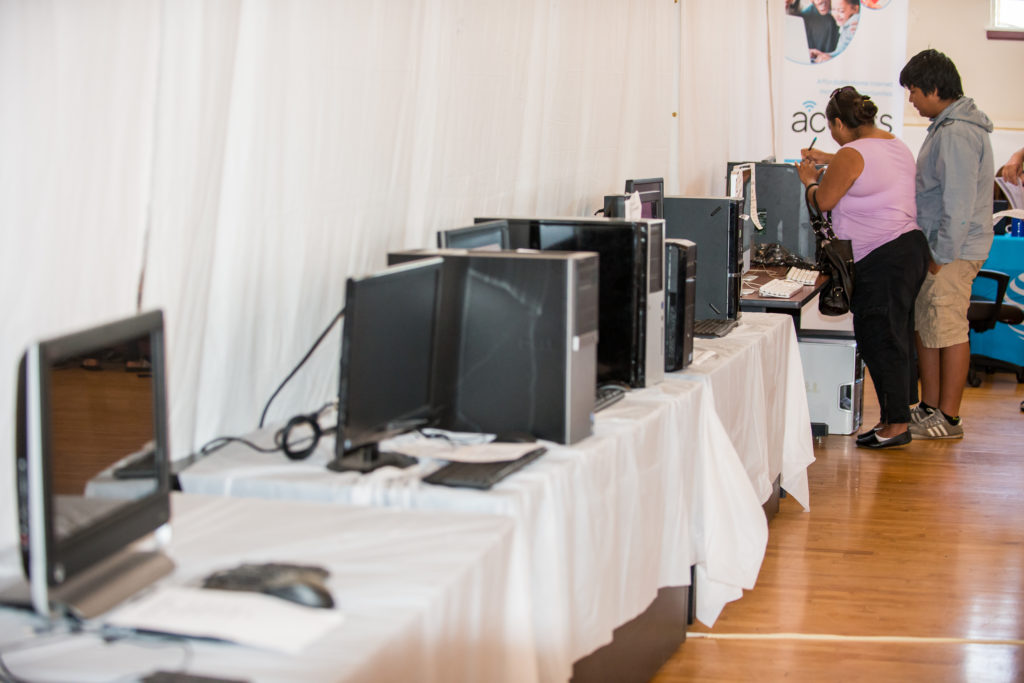 Families select from a variety of computer models to fit their needs.

The crowd outside the building reveals an easily-forgotten reality in today’s hyper-connected, technology-focused world. Even in the year 2017, there still exists a huge digital divide with issues of equity and access to technology disproportionately affecting low-income households. Studies by the Pew Research Center for Internet & Technology show that “Racial minorities, older adults, rural residents, and those with lower levels of education and income are less likely to have broadband service at home.” In 2016, only 53% of households earning less than $30,000 per year had broadband Internet access, nationwide.

Just think about the way you start your day. You probably wake up and immediately check your email for important messages. You might use the Internet to monitor traffic conditions before heading out on your commute. Upon arriving at your place of work you will likely use the Internet to communicate with your colleagues all day long. When you get home, your time on the web is certainly not over. Kids have to write a report for their homework? Want to ask your doctor a question? Need to check on your bank accounts? It’s hard to think of anything that is not done online these days.

Now imagine trying to live your daily life without the ease and convenience of a computer and high speed Internet access in your home. As Tech Exchange puts it, “Technology has the ability to revolutionize education and empower lives, but only for those who can connect to it.” Jessica (last name omitted for privacy), among the first customers to arrive at the Tech Fair that Saturday morning, is one Oakland resident who nearly found herself on the wrong side of that digital divide. Jessica recently walked outside to her car and found the window smashed. Her laptop had been stolen out of the back. The daily responsibilities of Jessica’s life could have easily come to a screeching halt at that moment. As a student, technology is a necessity, not a luxury for Jessica; she needs laptop to complete her schoolwork. As a single mom, her budget is tight and a replacement would not be easy to come by under normal circumstances. 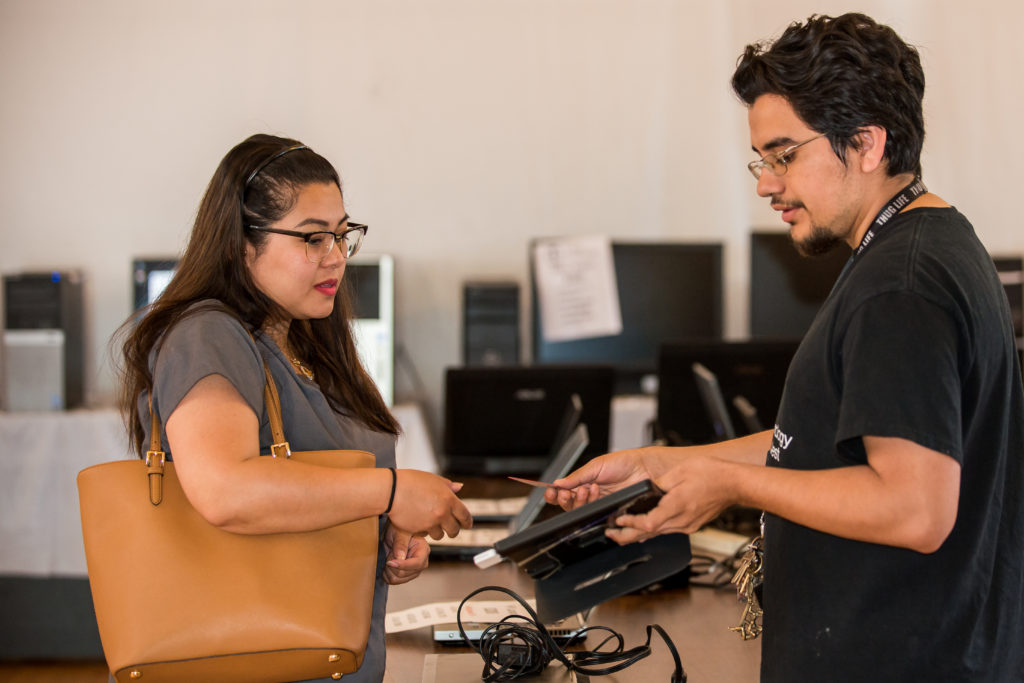 Fortunately, the offerings at Tech Exchange provide Jessica with the tool she needs at the right price. Inside that old bingo hall, Tech Exchange has created a makeshift warehouse and technology showroom. Tables line the walls, displaying all manner of computers and hardware: laptops, desktops, PCs, Macs, keyboards, monitors, mice, and cables. Prices range from $75-500; Internet costs just $10/month with no sign up or installation fees for qualifying households. New Internet subscribers can even receive a free computer or a $75 credit for an upgraded model. Jessica easily finds a computer that will fit her budget, selecting a lightweight laptop that she can effortlessly port from home to class to library and back. In under 30 minutes, Jessica is walking out the door toting a computer, charger, carrying case, and all the other accessories she’ll need. Remarkably, her incident of theft has become a mere blip on the radar screen and has not derailed her educational pursuits nor put her on a disaster course with debt. 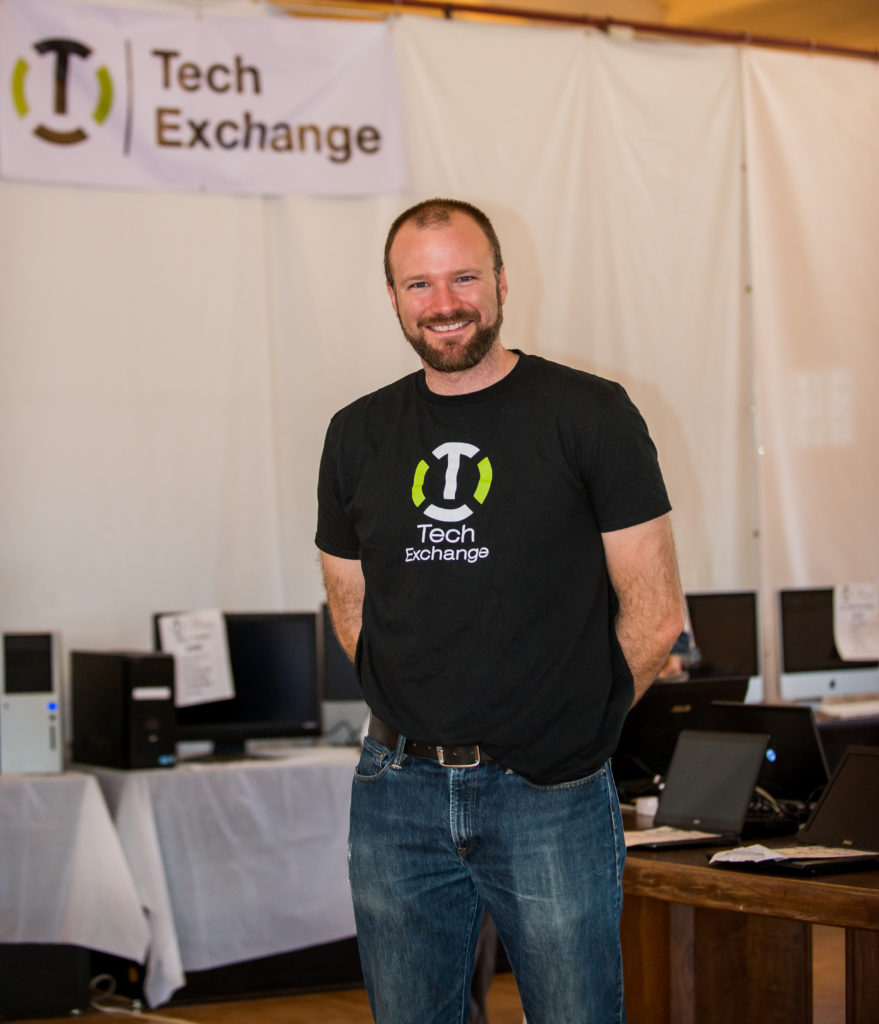 Seth Hubbert has been Tech Exchange’s Executive Director for 2 years, stepping in to replace the retiring founder who created the organization 20 years ago.

Stories like these abound in the hall. Seth Hubbert, Tech Exchange’s Executive Director, was primarily motivated to take the helm of the organization two years ago based on the inequities he witnessed as a teacher and Director of Technology for schools. Hubbert shares that Oakland is leading the field with many innovative and exciting EdTech initiatives, such as Hack the Hood, Hidden Genius Project, and Oakland Unified School District’s computer science coursework. “There’s so much richness within the district and all the exciting EdTech programs, but what’s the underlying problem? It’s still that half of low-income kids don’t have a computer or high speed Internet at home. We get something in front of them during the school day but then it just falls off and there’s no independent practice or diving in deeper into their passion because they don’t have the tools at home.” In contrast, Hubbert used to work at an independent school in San Francisco serving families who could afford five-figure tuition, where he says “everyone had access.”

It’s that reality that drives Hubbert to keep Tech Exchange on the cutting edge, continually expanding its footprint during the two years under his leadership. Hubbert wants to see an “equal playing field,” and to allow students to “really develop interests and passions.” Hubbert brought Tech Exchange to this new location in the Fruitvale in order to serve Spanish-speaking Latino families that he says “make up the most disconnected group. Statewide numbers show that 69% of that group has access to Internet, but if you take out access only through a mobile device it jumps down to 39% of that population.” 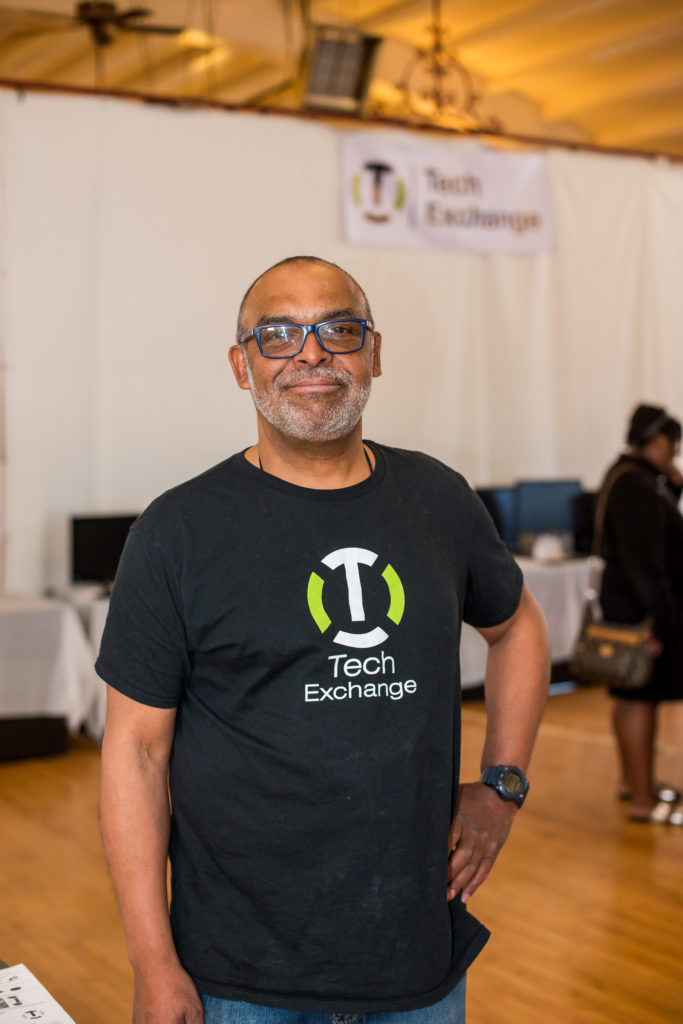 Domingo Vasquez, Director of Curriculum and Training, has been at the organization since 1999.

This important distinction between handheld mobile access and home broadband Internet service through a computer is echoed by Domingo Vasquez, Tech Exchange’s Director of Curriculum and Training. “We’re a long way away from the disappearance of the computer,” he says. “Everyone is saying it’s all going to be handheld devices and there are families that have just cell phones or a handheld device. They’re very practical when you’re on the go. But, I’ve seen students who have actually done their homework on their parent’s phone— and it shows.” When using a mobile device, Vasquez says “You’re the consumer, you’re just looking at it. With a computer, you can produce the content that’s on that device. That’s what we really want to encourage students to do.”

Vasquez’ insights are echoed by AT&T. An important partner for this event, AT&T staff are present to help eligible participants sign up for their Access program, which offers home Internet for just $10 a month to households in California with at least one resident who is a SNAP (formerly known as food stamps) participant or who receives Social Security benefits. Daren Chan, AT&T’s External Affairs Manager shares, “Broadband is the most important tool for education.” Chan is eager to share that AT&T also provides educational tools to help new Internet customers “use the Internet smart and safe,” with it’s Digital You programming offering information about cyber security.

All of these services together create a veritable one stop shop for the customers at this day’s Tech Fair. As the morning turns into early afternoon, the hustle and bustle continues. New customers trickle in, Tech Exchange employees explain the features and benefits of different computer models, and ring people up at the register. Some don’t owe anything at all. Others walk away with a laptop and low-cost Internet subscription for as little as $25 total. “It’s Christmas every day,” says Vasquez. As Jessica heads for the door with a smile and a wave, Hubbert and Vasquez catch each other’s attention. With a twinkle in their eye they nod in agreement, “Another satisfied customer.”

Learn more about how TechExchange works with institutional partners to refurbish used computers.