Bridging the Gap: Bringing Innovations from Lab to Market

Home Bridging the Gap: Bringing Innovations from Lab to Market

Dr. Shuvo Roy, Professor of Bioengineering and Therapeutic Sciences at the University of California, San Francisco (UCSF), was stuck. He had developed technology to create a surgically implanted bioartificial kidney that had been funded by the National Institutes of Health (NIH). However, the invasive surgery required to implant such a device created excessive risk to patients. If only he could take the filtration technology (known as hemofiltration) he had used in his implantable bioartificial kidney and translate it to a wearable device – a portable dialysis device. Less risky, requiring a much less invasive surgery, and easier from a regulatory perspective. Unfortunately, there was a money problem. He had exhausted his NIH grant and was at an impasse. 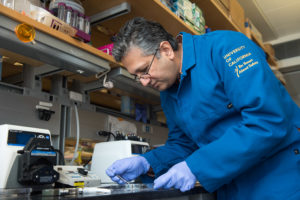 Cut to a few years prior. Dr. Reg Kelly, Director of QB3 takes the podium at a public event. (QB3 stands for Quantifiable Biology 3 – a collaborative effort between the three campuses of the University of California: Berkeley, San Francisco, and Santa Cruz – conceived in 2000 as a way to improve the state of California’s economy.) Dr. Kelly begins talking about the funding gap between NIH-based traditional research funding and startup commercial funding. In the audience is Gary Rogers, Chairman of the Board for the Rogers Family Foundation.

“It was purely coincidental,” Dr. Kelly explains, “I get these people who want to hear talks about biotechnology, and I standardly give those talks. I was pointing out the problem of bridging the gap. Gary said, ‘Oh, this is ridiculous, let’s put some money into this.’ He was the only one who did. This was one of the few cases where giving a talk actually led to
something quite exciting.”

The gap that Kelly refers to is also known as the “valley of death” — the lack of proof-of-concept funding for scientists who want to commercialize their research. This “valley of death” continues to frustrate scientists such as Dr. Roy. There has always been a gap between the discovery phase, which the NIH will fund, and proven technology that can attract private investment. That gap has widened over the past few years because of the difficult funding climate in the venture capital world, especially for life science startups. So naturally, this is where the Rogers Family Foundation stepped in.

“If these ideas don’t make it to the marketplace, they’re going to just die. So few of these scientists understand what it takes to get into a place where a venture capitalist firm or big pharma will fund the next round. It’s pretty rare. We say, look, we’re going to give you this money for two years, but it’s intended to get you to the point of where it’s not just of value to you, but more to the market in general,” said Gary Rogers.

How it worked:
Every year, any and all QB3 research teams were invited by the Rogers Family Foundation to submit a funding proposal. Dr. Kelly and his team at QB3 would narrow the applicant pool, on average 20 to 30 proposals, down to the 5 to 7 scientist teams whose research was most prepared to “bridge the gap.” These chosen teams would then have the opportunity to present their research to a committee made up of both QB3 staff and the Rogers Family Foundation.

Rogers Family Foundation CEO Brian Rogers stresses the importance of this step. “These scientists are used to giving longer presentations that go deep into the science. But if they’re trying to raise money, they have to be able to speak and communicate at a different level – they have to be able to effectively communicate their idea to a layperson or a venture capitalist without getting too bogged down in the science, and do it in 15 minutes or less. It is more sales than science. This is very new concept for most scientists.”

After all of the presentations have concluded, three research teams would be chosen to receive the $250,000 grants, but there were some strings attached.

“The $250,000 was not granted to the researchers all at once. Each team was granted $100,000 to support one year of research. After a year of work, each team was required to return to the committee and present their progress against their stated benchmarks in order to get a second year of
funding. In addition, we included an incentive bonus. If the researchers accomplished all of their goals, they received a bonus of $25K each year. All in all, the total that each team could receive was $250,000 over two years. We felt as though for research grants this wasn’t a lot, but the scientists always conveyed how critical the money was, enabling teams to hire additional researchers who could do the pipetting, run the assays and catapult the work forward,” said Brian Rogers.

“It’s amazing how hard they compete and how jealous they are to get this small amount of money at this stage of their development. It’s just golden. It doesn’t come with any liabilities…just meet your goals.” said Gary Rogers.

However small these grants may seem in the overall scientific funding sector, for scientists or researchers like Dr. Roy, who was stuck in that gap, it’s the difference between seeing the research move forward to market or languishing in the lab.

“For us, these are not small grants. These are significant. If you want to get the attention of the best faculty, you have to come in with an amount of money that’s comparable to what the NIH grants, and that’s $250,000. That wasn’t small.” said Dr. Kelly.

Dr. Shuvo Roy was awarded with a Rogers Bridging the Gap grant in 2009 and took advantage of this “small grant” to continue his wearable hemofiltration research. With the money, he was able to develop prototypes and bio-compatibility studies that are required by the FDA before a product goes to market. He then approached companies and investors and talked about his business plan. “I had very little background on product development and business translation before I met the Rogers Family,” said Roy. As part of the grant process, Roy was encouraged to think of the project in developmental terms instead of research terms and help show value to future investors.

But then something completely unexpected happened. The dialysis industry, fearing competition, pushed back and other funding opportunities dried up. “The dialysis industry has disincentivized research that would compete with their treatment,” said Roy.

Yet, because of his process with the Rogers Family Foundation, Dr. Roy was able to step outside of his box and realize other possibilities for his research — in this case, for pancreas research.

“While this research may not be able to move forward for the kidney at this time, it has value for another space. Guess what, for the people building the artificial pancreas, there’s precedent. I had a technology that overcame the shortcomings of the existing technologies in that field,” said Roy. 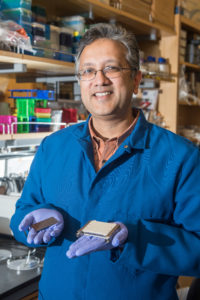 “The grant helped me bridge between business and science, yes, but also from the field of kidney research to pancreas research, and ultimately to the Juvenile Diabetes Research Foundation (JDRF). They called and invited me to submit a proposal for an initiative called the Encapsulation Consortium. JDRF told me that my kidney work seems applicable to the pancreas and I submitted a proposal for JDRF. This turned into a $1 million grant allowing us to push that forward.”

In addition to helping researchers like Dr. Roy bridge the funding gap from early research to marketability, the Rogers Family Foundation has also encouraged QB3 in its efforts to better support the scientists in founding their own start-up companies. QB3 has created pathways for new company formation, including dedicated incubator space and new connections to venture capital. The Rogers Family Foundation, knowing that philanthropy can only be sustained for limited periods of time, has encouraged QB3 to create an evergreen fund wherein revenue from successful ventures can be dedicated to future bridging the gap needs.

Dr. Kelly agrees. “The important thing is to make this sustainable. We don’t want to be living on handouts. I’ve learned a lot about being a business, as have the researchers and scientists. The Rogers Family has taught us how to fish and we’re now able to use our entrepreneurial nature. We’re able to stand on our own feet. That’s the goal with this giving.”

From 2005 to 2016, the Rogers Family Foundation invested $6,500,000 in more than 20 projects. While the Rogers Family Foundation’s funding for the “bridging the gap” project has come to a close, the entrepreneurial work of QB3 under Kelly’s leadership continues to grow and prosper as it evolves and sustains its efforts to bridge the “valley of death” for innovative
ideas and research.